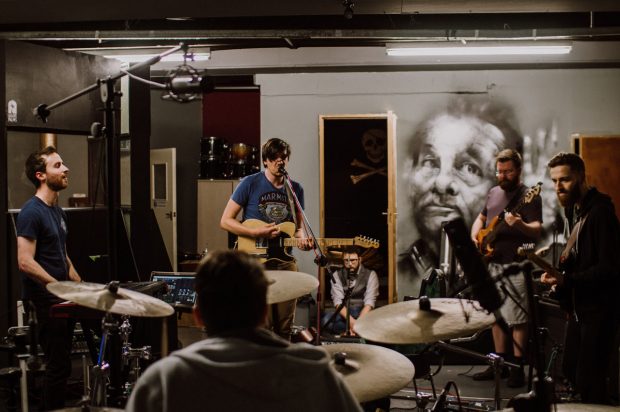 After 9 months of crafting our songs, we finally took to the studio in May to finish recording of the full Album at Magic Garden Studios. We had the chance to work with the legend Gavin Monaghan and Joe Murray (Editors, Jaws, The Twang, Ocean Colour Scene) to help us to find and hone our sound. One month later and it’s all done..

It was such an incredible experience, with lots of incredible stories of how bare outlines of songs were filled with exciting colour and detail.. We can’t wait to get them to you!

A Day In the Studio

Gary, a good friend of ours came to the studio with his trusty Tuk Tuk and wrote of his observations..

OK, I’ll start this  blog with a request. I ask you to accept that I cannot play any form of musical instrument whatsoever, I’ve never been inside a recording studio before, never mind seen a full album being produced, and have no idea of how to distinguish a crotchet from a quaver. I’m most certainly not a Music Journalist. But I  DO love music, particularly live music, and particularly music of the Speak, Brother variety. I guess that makes me a fan right? So that’s the deal, I’m a fan, writing from the heart about a debut album from a great band. Biased? Probably. Is this blog clumsy and cliche ridden?  Most definitely. Despite all that, if it prompts you to take a listen, it’s done its job. Accept all that and we’re good to go!

A bit of background. I have been familiar with the music of Speak, Brother since the release of their single ‘Lions Roar’, the unofficial Rugby World Cup song, when the tournament  came to England’s shores in 2015. They appeared on the BBC regional news to promote the song, and my curiosity was aroused. A catchy, punchy, anthemic song which should, if there was any justice in the world, have become the OFFICIAL World Cup song, I suppose you could say my Faith was in Speak,Brother, not Paloma (go on, Google it, I know you want to)Several live gigs later, and S,B  were firmly on my musical radar. A couple of EP releases,  a listen to  a smattering of James Herring solo singles, and it’s fair to say I was hooked. Musically mature beyond their years, with an innate ability to make their music sound sincere but not studied; earnest, but free of  schmaltz,  uplifting, but not over the top. Not easy to pull off, but they do it with aplomb.

So with an abundance  of live gigs under their belt, and some memorable songs already established in their back catalogue, they announced almost a year ago that they were going to write and produce a full length album.Through the wonders of crowd funding and anonymous (and VERY generous  individual backing,) S,B find themselves in residence at the very wonderful, quirky, Magic Garden music studios in Wolverhampton. I announce here without a hint of shame that I asked to come along to witness proceedings. They agree, and I find myself inside the studio, which is exactly as I imagine it; shabby chic, packed to bursting with some really cool vintage instruments, ex Army parachutes draped from the ceiling, all accompanied by a tryptyche of pencil drawings of Donald Sutherland as the spy in the 39 Steps, and a huge hand painted image of Bill Murray on the wall. Why Bill Murray? Well,  why not?

I met the Magic Garden lynchpins, Producer Gavin Monaghan and Engineer Joe Murray and hit it off immediately; they’re my kind of people. The jokes  never stop,  but neither does the professionalism, they’ve a job of work to do and they are masters at getting things done. I hear a couple of contenders for the album being worked up. Starting with ‘Magnificent’ Soaring, anthemic (that word again), a song comfortable in its own skin,  proud of itself, and rightly so. A powerful percussive beat keeping things on track. It’s easy to visualise this song being played in a stadium, James Herring’s powerful and increasingly confident vocals stealing the show.  A hymn on steroids right there.

A great start, followed immediately by a song which on first listening, is a polar opposite to Magnificent. ‘Man of Honour,slow, quiet brooding, introspective, thoughtful, considered. Reminiscent of REM’s ‘Sweetness Follows’ from 90’s masterpiece album ‘Automatic For the People’ Not necessarily similar in sound, but in temperament, in feel, a song to sit down and really listen to. Some songs can get away with being heard, some demand to be listened to; this is one such song.

Dan, the S,B drummer gets to work on the percussion element of the 3rd song I hear; Princess. A song about a 12 year old girl committing suicide, feeling helpless and ignored, worthless with no-one to turn to. Guitars, Drums, Mandolin, The standout element to me was the Harmonium in the background, mesmeric, haunting, a hybrid of church organ and Hare Krishna Ashram, it draws you in, and compels you to listen. A little bit of Matt Cotterill genius right there. That man knows how to tickle the ivories..

A day of doughnuts (not any old doughnuts, Krispy Kreme doughnuts!), coffee, hot and black, poured from a kettle last used on Little House on the Prairie, surreal, stream of consciousness stories from Joe, and trips from the studio to town in my tuk tuk to blow away the cobwebs in the late Spring.  What’s not to like? If the 3 songs I heard from S,B are anything to go by, this debut album is going to be….Magnificent. I pull away from the studio in my blinged out tuk tuk for the long drive home, and in a week of terror and horror in Manchester, feel hope and optimism coursing through my veins. The music’s done its job.

When does the Album hit the streets, it all seems to have gone quiet!

Hey Richard! The Album is out in April! However, we’re dropping singles all over the place on the lead up to the Album. The single ‘Magnificent’ (https://www.musicglue.com/speakbrother/) just came out and another in November! Keep an eye out on the emails 🙂